Game meat shot with lead ammunition can contain levels of lead which put frequent consumers, women of childbearing age especially who are pregnant or trying to become pregnant, and children at risk. Reduce your risk by:

Game meat shot with lead ammunition can contain high lead levels, but, consumption of game meat by the European population as a whole is low. This means that for the average consumer, who eats very little game meat, potatoes and cereals tend to be the greatest contributor to their dietary lead. However, for frequent consumers of game meat, especially hunters and their families, lead in game meat can contribute much more lead to their daily diet (see Buenz et al., 2018).The European Food Safety Authority (EFSA) and the Joint Food and Agriculture Organisation/World Health Organisation Expert Committee on Food Additives state that there are no safe thresholds when it comes to consumption of lead (EFSA, 2010).

In this context, frequent consumers of game meat as well as children and women who are pregnant or trying to become pregnant are at greatest risk (because foetuses are most sensitive) should take steps to minimise their exposure.

All expanding lead core bullets fragment on impact and shed lead particles through the meat as the bullet penetrates. This is also true for lead shot. This gives rise to microscopic particles of lead widely distributed throughout the carcase. Expanding lead core bullets typically release thousands of fragments of varying size (including millions of nanoparticles) and the larger ones can be visualized using X-rays (Arnemo et al., 2016; Knott et al., 2010).

The lead levels are greatest immediately surrounding the wound channel, but may remain detectable up to 30cm away depending on bullet type, bullet resistance during penetration and bullet velocity upon impact.

Attempts to remove lead ammunition from game meat can be successful at significantly reducing the levels of lead contamination. Research in Sweden has shown that proper handling of game shot with lead ammunition can effectively eliminate the risk (Kollander et al., 2014). The Federal Institute for Risk Assessment, Germany (BfR, 2011) states that cutting out large sections of meat around the bullet hole is not always enough to guarantee removal of lead. 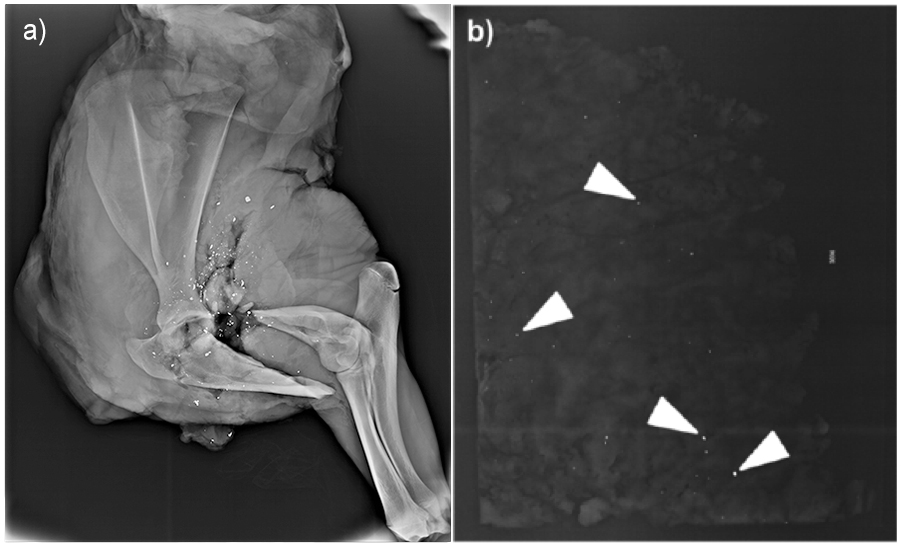 Follow the Swedish advice on game meat handling to trim away the majority of lead contaminated game meat: